The co-author of a new book on adventures in Devon, Cornwall, Somerset and Dorset, shares five 24-hour escapes in hidden corners of these holiday hotspots. You’ll need a sleeping bag … 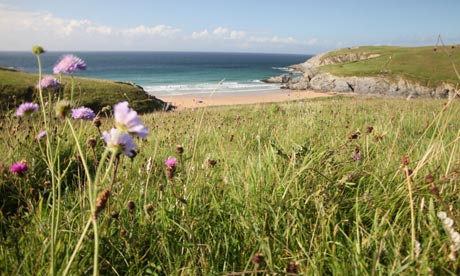 When you’re done with the bars and lights of England‘s surf capital of Newquay, head down the coast 20 minutes to kayak or swim out among the great stacks of Trevellas Cove. The brave jump from the pinnacle heights, but I prefer to watch while I forage for fat low-tide mussels on the waterline, then cook these up on a small fire (must be below the high-tide mark on the beach).

After this yummy snack, start to head back towards Newquay along the coast. First seek out the lost chapel of St Piran’s, buried under sand dunes near Perranporth, then continue on to explore the remote north end of the beautiful Holywell beach, where you will find a huge sea cavern that contains a holy well, flowing down through a series of calcite flowstones and natural pools.

As evening approaches, continue on for three miles to the poppy and corn-marigold meadows on the downs of West Pentire Head, near Newquay. As the sun goes down, keep watch for dolphins and basking sharks. You could shelter for the night in the sandy caves of Porth Joke beach below, or there’s a small campsite in a valley set well behind the beach.

Next morning, rise early and venture inland to the Cornish Alps near St Austell to seek out the white peaks and extraordinary opal-blue lagoons left over from the China clay industry, perfect for a morning wake-up plunge. There are eerie mining ruins to explore all around this area, including the remains of a giant waterwheel, leet and viaduct in magical woodland at Luxulyan, about 3 miles north-east of St Austell, or the lost valley of Tregarsus to the west. Or you could climb the iron ladder to the top of the extraordinary ruined hermitage at Roche to the north.